Node.js vs Python: comparing the two technologies for the backend 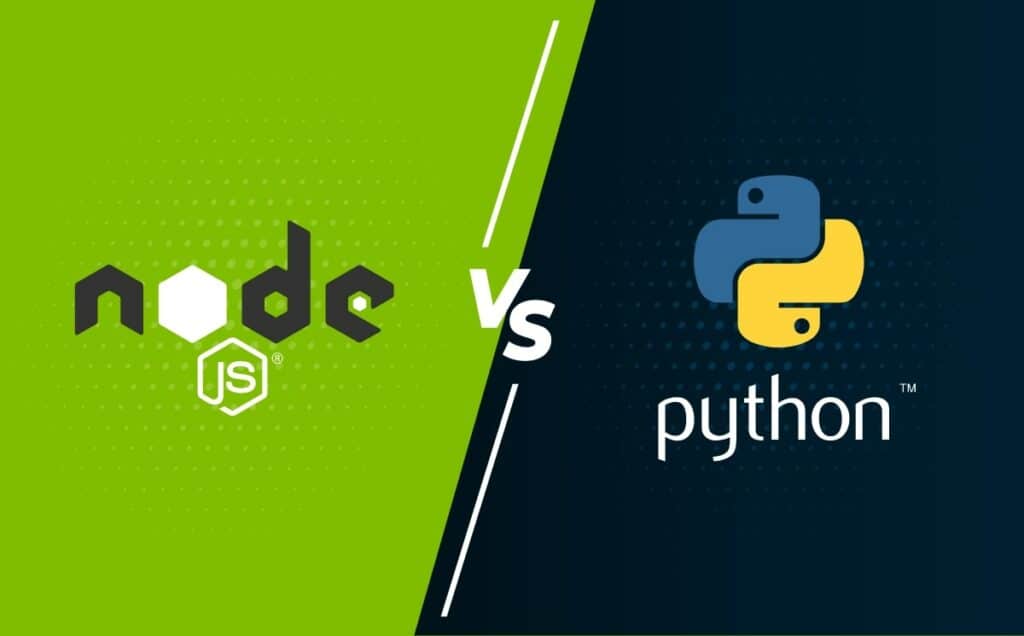 Choosing a programming language for the backend development of an application is a crucial step. There are several languages that meet the needs of various projects. In this article, we analyze Node.js and Python, the two most widely used languages, to discover their features and provide a guide for an informed choice.

During the design phases of an application, one of the questions we ask ourselves is: which programming language to use for the backend? Nowadays the choice is not easy. In fact, there are several programming languages, from the most classic and well known ones (for example Java), to the more “modern” ones such as Dart. Therefore, in many cases, both the functionality and computational capabilities required by the application and the skills of the developers involved in the project are analyzed. This last aspect, in many cases, heavily conditions the final choice.

Let’s assume for a moment that this constraint is looser and that, therefore, we can freely choose the programming language for our future application. Obviously, many programmers have their own preferences, but let’s not be constrained by that. Below we will look at two of the most widely used languages for backend development: Node.js and Python. We will see the main features of each of them and compare them.

Node.js is not a programming language, but rather an open-source runtime environment for JavaScript. It was initially released in 2009 by Ryan Dahl, while the latest version (at the time of writing this article) is a few weeks old, namely version 16.14.0 ‘Gallium’ (LTS) dated 2022-02-08.

The outstanding thing about Node.js is that it is based on Google’s V8 engine. It is a virtual machine with built-in interpreter, compilers and optimizers. Written in C++, this engine was designed by Google to be used in Google Chrome. The purpose of this engine is to compile JavaScript functions into a machine code. V8 is known for its high speed and constantly advancing performance.

Python is an open-source high-level programming language. It was first released in 1991 by Guido van Rossum. The latest version is Python 3.10.2, and it was released in January 2022.

Python runs primarily on Google’s App Engine. Also developed by Google, the App Engine allows you to develop web apps with Python and allows you to benefit from many libraries and tools that top Python developers use.

Node.js is designed as an event-driven environment, which allows asynchronous input/output. A certain process is called as soon as the respective event occurs, which means that no process blocks the thread. The event-driven architecture of Node.js is perfectly suited for the development of chat applications and web games.

However, this feature is not ideal for sequential and/or transactional procedures where an operation must occur if and only if all previous operations are successful. There are some patterns to overcome, if necessary, this drawback, but they complicate the writing and the understanding of the code.

Differently, Python is not natively event-oriented. It is possible, therefore, to use it to develop an asynchronous and event-driven application with the help of special modules and/or frameworks (e.g., asyncio, celery).

Both languages belong to the category of interpreted languages that are generally slower than compiled languages, such as Java. Despite this, both Python and Node.js show decent speed in code execution.

In particular, Node.js is faster than Python in many cases due to Google’s V8 engine and its event-driven non-blocking architecture. This aspect, combined with caching, allows you to process several requests at the same time speeding up the execution of the application. In contrast, Python is single-stream, which means that requests are processed much more slowly.

Applications that need to provide real-time functionality are usually developed in Node.js. However, if complex calculations or application logic are required, Python is preferred. For example, applications oriented towards data mining, machine learning and AI are often developed in Python.

The syntax of Node.js is quite similar to JavaScript, so it is very much appreciated by front-end developers. However, for some operations it requires writing several lines of code. Python’s syntax is often valued positively due to its compactness and lack of parentheses. In fact, a few lines of code are enough to perform complex operations or define particular data structures. In addition, Python’s syntax lends itself better to reading and debugging other people’s code. For these reasons, even if the evaluation is very subjective, Python is used in many academic courses as the main programming language.

The architecture of Node.js allows for native microservice-oriented development, where each module will run independently and communicate with others where necessary. This allows you to easily add more microservices and scale a web application both horizontally and vertically. Scaling horizontally means adding new nodes to the system, while scaling vertically requires increasing the resources of individual nodes.

To scale a Python application, you need to use multithreading. Although there are several libraries to do this, you must consider that the result is not a “true” multithreading. In fact, even if you define multiple threads, the Global Interpreter Lock (GIL) does not allow the Python interpreter to execute tasks simultaneously, but only one thread at a time. Python must necessarily use GIL, even though it negatively affects performance, because Python’s memory management is not thread-safe.

Node.js can be easily customized, extended and integrated with various tools. libraries and packages are managed by NPM – the Node Package Manager. It is one of the largest repositories of software libraries. NPM is fast, well-documented, and easy to learn to work with. Babel (a JS compiler) facilitates front-end development with older versions of Node or the browser. Jasmine., on the other hand, is useful for unit testing, while Log.io is used for project monitoring and troubleshooting. Finally, for data migration, process management, and module bundling, you can use Migrat, PM2, and Webpack. Web application development can be facilitated through the use of frameworks such as Express, Hapi, Meteor, Koa, Fastify, Nest, and Restify.

The pip package repository provides a plethora of modules to customize your Python project. Pip is fast, reliable and easy to use, so even developers find it easy to learn to work with. You can find modules for data analysis, libraries for interfacing to databases and much more. Among the most popular frameworks for developing web applications we remember Django and Flask that we have already analyzed in the article Django vs Flask: Python web frameworks comparison.

Node.js is mostly used for backend development of web applications. However, for frontend development, JavaScript is used so that both frontend and backend share the same programming language. Moreover, you can also develop hybrid desktop and mobile applications along with cloud and IoT solutions. Being cross-platform, a single desktop application will run on Windows, Linux, and Mac without any code changes and consequently reducing development time and costs.

Python is full-stack, so it can be used for both backend and frontend development. Similar to Node.js, Python is cross-platform, so a Python program written on Mac will run on Linux. Both Mac and Linux have Python pre-installed, while on Windows you need to install the Python interpreter yourself. While Python is great for web and desktop development, it is rather weak for mobile computing. In the IoT and AI field, Python’s popularity is growing faster and faster in recent years.

Node.js is based on JavaScript and can be easily learned by beginner developers. As soon as you have some knowledge of JavaScript, mastering Node.js should not be a problem. Installing Node.js is quite simple, but it introduces some advanced topics. For example, it can be difficult to understand its event-driven architecture at first. Event-driven architecture has a tremendous impact on app performance, but developers often need some time to master it.

If you don’t know JavaScript, it’s probably best to start with Python. Its simple and compact syntax makes it an easy language to learn. Learning Python also teaches you how to indent your code correctly, since the language is sensitive to indentation and whitespace (no brackets).  Installing Python is more difficult than installing Node.js since it depends on the operating system, although on Mac and Linux the interpreter is already pre-installed.

In both cases, we recommend using virtualization environments such as Docker containers to isolate the development environment from that of the host operating system.

Due to its event-driven architecture, Node.js is a perfect fit for applications that have numerous concurrent requests, heavy client-side rendering, or frequent data exchange between client and server. Some examples include IoT solutions, chatbots, real-time messaging, streaming platforms, and complex Single Page Applications. However, Node.js is not the best option for developing applications that require a lot of CPU resources.

In this article, we have analyzed the two languages from different aspects. As mentioned at the beginning, the choice depends on various factors, including the functional and computational demands of the individual project. Personally, I prefer Python as it allows both full-stack development and data analysis, but that doesn’t mean that in some projects Node.js presents itself as the best alternative.

To summarize the main features of the two languages we report below an infographic. 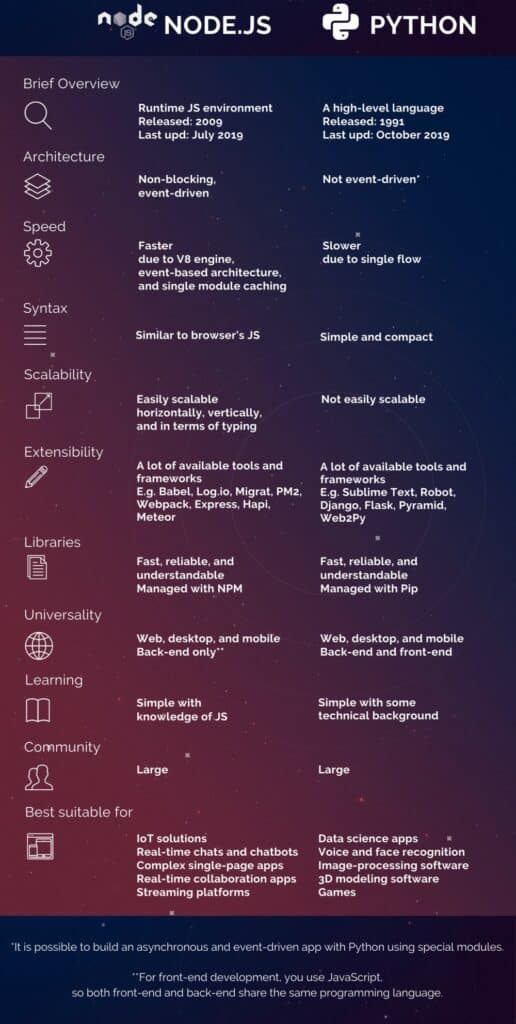 With Elasticsearch’s bucket aggregations we can create groups of documents. In this article we will mainly focus on aggregations based on keyword type fields in indexes. We will use several examples to understand the main differences between the available aggregation functions.

In addition to text search, Elasticsearch allows analysis on data using aggregations. Among the various types of aggregation available, the metric ones are aimed precisely at calculating statistics on one or more fields. Through examples we will see what information we can extract with this type of aggregation.